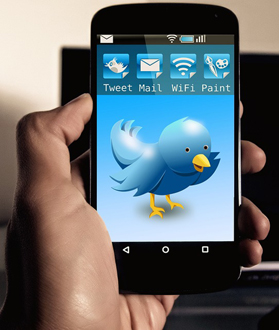 Should you really spend time developing a Twitter presence or should you concentrate on the other Social Media platforms?  Or just email?

First of all, what about that name?  Twitter.  Where did that come from?  Well, the origin of the name does help to explain the idea behind the platform.

I have a birdfeeder in my backyard.  But there’s a huge difference in the number and variety of birds visiting my backyard when I have a well-stocked feeder.  As opposed to when I let it go empty for a few days because I didn’t get my butt out there to fill it up.

When the feeder is neglected and not refilled after it runs out of seed, the bird traffic … kind of like when you don’t pay attention to your social media presence … drops off considerably.  And quickly.  You still have some stragglers but they check out the feeder and then move on.

But when I keep that feeder stocked with a never-ending supply of seed, the bird traffic … like online traffic … is amazing.  A crazy variety of bird types parading through.  Sometimes numerous species side-by-side.  Doves, jays, sparrows, robins, quail (fat quail because of my feeder) and on and on.

And when I venture out back, the sounds that those birds emit are amazing.  Songbirds … for example … make up almost 50% of the world’s 10,000 bird species.  Non-songbird species make simpler sounds that are based on instinct rather that learning.

For birds … and in humans … singing is a chance to show off.  After I did a little reading on songbirds, I learned that most of the birds you hear singing are male.  Now I’m not saying anything here other than what the research says.

So even before I read about what the developers of Twitter did when they were searching for a name for their new company, it was readily apparent that it had to involve birds.

My wife has a bird sound on her phone when she gets a text.  Usually from our children.  I always tell her that she just received a tweet because that’s what I perceive a Tweet should sound like.

How did the developers of Twitter develop the name for this one-of-a-kind social media platform?  Well … I know it’s hard to believe … but they actually looked through the dictionary and stumbled across the word “Twitter”.

They decided that it was perfect.  And what were those definitions?  “A short burst of inconsequential information.”  And “chirps from birds.”

So that’s what they named their brand revolutionary new social media platform.  All it did was explode.

A good analogy for the Twittersphere is a group of people hanging out … at a bar or around the water cooler … and chatting.  But conversing using only text and being limited to 140 characters or less.

As with most of the other social media sites, Twitter has two main uses:

1.  Personal – For keeping in touch with friends and family.  And to socialize with others who are interested in the same things you are.  Socializing is not what we’ll be talking about here.

2.  Business – Everything you’re doing here is about building your business and your brand.

Don’t mix the two.  Twitter for business is only effective if you keep it completely separate from any personal activity.

Your goal as a business or company is to leverage Twitter … or any social media platform … to earn a return that is greater than the cost … whether monetarily or in time … you’re putting into it.

·  You can use Twitter to generate direct traffic to your blog or website.  Sure, probably minimal at first.  But it’ll grow.

·  It helps build and cement relationships.  Relationships which can evolve into kick-ass partnerships or co-venture activities.

·  Hanging out on Twitter can help you get over “writer’s block” and conceive new ideas for blog posts and website content.  It can be an interesting place to hang out if you follow the right people.

·  Twitter for business can help get your website or blog out in front of people who may be interested in what you’re offering.  The resulting backlinks to your site will help to grow your site traffic.

·  You just never know who may end up following you.  Or what a relationship that develops with those followers may grow into.

·  Use Twitter’s paid advertising methods … Twitter ads … to blow up your traffic often at a much lower PPC (Pay Per Click) than other pay models.

·  Be wary of automating everything.  There are services that help you do this but it often “isn’t real”.  If you want to use automation, still do your best to keep it as real as possible.

·  Don’t un-follow someone just because they don’t reciprocate and follow you.

·  Make sure your Tweets are excellent.  Just like any other content you write whether it’s blog content, emails or sales letters.  Always remember that your newest followers are reading your latest posts and they’re not hanging around if your stuff sucks.

·  Don’t recommend blogs and websites without having a good reason.

·  You can be sociable but … as a business … watch what you’re commenting on.  Taking sides in the latest political debate or religious issues can quickly negatively impact your business (unless … of course … that’s what your business does).

·  Is what you’re writing adding value to your readers?  If not, delete it.  Don’t be that person that Tweets something stupid just to put something out there.

·  I know this may seem obvious but this is where a lot of people (celebrities for example) blow it.  Don’t Tweet when you’re not yourself (under the influence).  It can lead to disastrous results.

Website Cards can help grow your traffic, drive online sales of whatever you’re selling or result in the specific action that you’re trying to get people to take.

3.  If you have apps that you’re trying to distribute, Twitter itself says that using Twitter for business will give you an upsurge in app installs.  More than 83% of Twitter member use mobile devices.  They’re looking for apps.  Twitter says that their users use 24% more apps than smartphone owners who aren’t members.

People go to Twitter to see what’s going on now.  To stay abreast of breaking news.  Seeing information as it’s becoming available.  And sharing that information with other people.  And businesses.

There are hundreds of millions of people using Twitter every day.  And Twitter claims that more than 500 million Tweets are being sent out daily.  I know, so many of them are bad and useless.

But Twitter allows businesses to reach a global audience.  And new customers.

It doesn’t really matter what kind of business you have.  A one-person show or a large corporate entity.  Twitter can help you build relationships with an involved audience.  And these relationships can lead to growth in your business.

This article isn’t meant to be a tutorial on Twitter for business.  It’s more of an overview and introduction.  Do your own research before you make a decision on whether or not it’s worth the time and effort for your business.

And … of course … I’m an email guy.  Social media is a great way to help grow your business.  But don’t ignore building an email list and using autoresponders and broadcast emails to explode your business.

In my opinion, the ROI on building an email list is far greater than any social media presence you’ll develop.  And once you have an email list, it’s yours.  No one can kick you off their platform and blow up your business.  So build that part of your business first.